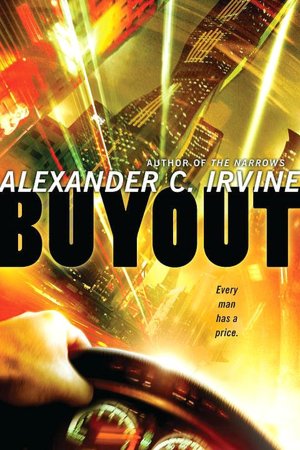 From acclaimed author Alexander C. Irvine comes a gritty near-future thriller in the paranoid, prophetic vein of Philip K. Dick and Richard K. Morgan. One hundred years from now, with Americans hooked into an Internet far more expansive and intrusive than today’s, the world has become a seamless market-driven experience. In this culture of capitalism run amok, entrepreneurs and politicians faced with rampant overcrowding in the nation’s penal system turn to a controversial new method of cutting costs: life-term buyouts. In theory, buyouts offer convicted murderers the chance to atone for their crimes by voluntarily allowing themselves to be put to death by the state in exchange for a one-time cash payment, shared among their heirs and victims, based on a percentage of what it would have cost taxpayers to house and feed them for the rest of their natural lives. It’s a win-win situation. At least that’s what Martin Kindred believes. And Martin is a man who desperately needs something to believe in, especially with his marriage coming apart and the murder of his brother, an L.A. cop brutally gunned down in the line of duty, unsolved. As the public face of the buyout program, Martin is a lightning rod for verbal and physical abuse–but he embraces every challenge, knowing his motives are pure. But when evidence comes to light that a felon in line for a buyout may have been involved with his brother’s death, Martin’s professional detachment threatens to turn into a personal vendetta that will jeopardize everything–and everyone–he holds dear. Inspired by today’s politics, Buyout is an unforgettable look at an all-too-believable future . . . and one man’s struggle to do the right thing.