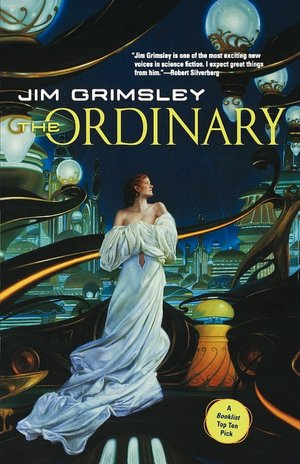 The Ordinary by Jim Grimsley

Jim Grimsley's novels and short stories have been favorably compared to the works of Samuel R. Delany, Jack Vance, and Ursula K. Le Guin. Now he unleashes an ambitious and audacious collision between science and magic. The Twil Gate links two very different realms. On one side of the portal is Senal, an advanced technological civilization of some thirty billion inhabitants, all cybernetically linked and at war with machine intelligences many light-years away. On the other side is Irion, a land of myth and legend, where the world is flat and mighty wizards once ruled. Jedda Martele is a linguist and trader from Senal. Although fascinated by the languages and cultures of Irion, she shares her people's assumption that Irion is backward and superstitious and no match for her homeland's superior numbers and technology. But as the two realms march inevitably toward war, Jedda finds herself at the center of historic, unimaginable events that will challenge everything she has ever believed about the world—and herself. The Ordinary is a powerful and entrancing tale of magic, science, and the mysterious truth that binds them together.